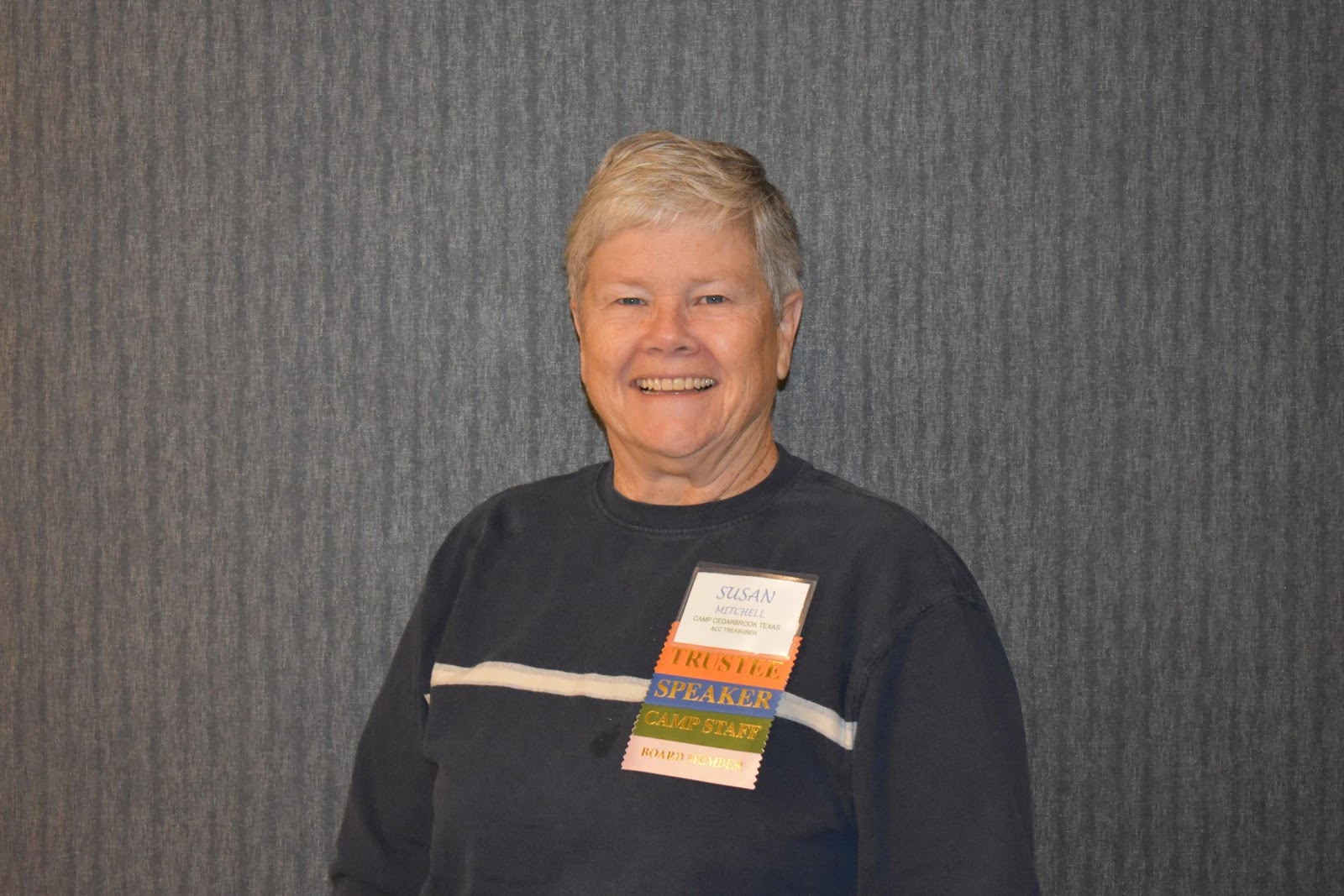 Brent Hultman serves as the President of the Association of Cedarbrook Camps. Brent joined Colorado Camp Cherith as the first director of their boys camp in 2000. Seeing the impact that this ministry had on young people inspired him to work with 10 different Cherith and Cedarbrook member camps as director, cabin counselor, CILT instructor, and activity leader for wilderness survival, archery, and drawing. Serving on the Rep Council and the Board of Trustees for the Association of Cedarbrook Camps deepened his appreciation of the work of this ministry. Brent’s work outside of camp is in leadership development and he enjoys bringing those skills to working with new leaders at various camps to support the future of our camps.

Marilyn Mills is the Vice President of the Association of Cedarbrook Camps. Marilyn first attended Camp Cherith in Southern CA as the Pioneer Clubs Coordinator for her church in 1985 and became hooked on camp. Her camp time includes more than 25 years as the camp nurse, a season as the cook and for fun she loves teaching crafts. Marilyn served on the Board of Directors for Southern California for many years. She became better acquainted with the association by attending conferences each year and then as a member of the Rep Council. This role continued on through the transition to the Board of Trustees of the Association of Cedarbrook Camps. Marilyn has been the Vice President for the Association since 2014.

Marilyn has her Bachelor Degree in Nursing and just retired after 46 years as a pediatric nurse. Much of her nursing career has been in leadership providing the opportunities to understand regulatory fundamentals, human resources and risk management essentials that can also apply to the ACC. Her 3 kids were at camp every summer, are all CILT grads and now the grandkids attend camp as well.

Susan Mitchell is the Treasurer of the Association of Cedarbrook Camps. As such she oversees fund management and financial transactions for the ACC. Susan has been involved in Camp Cedarbrook Texas since 1986 serving on staff at almost every position as well as their Treasurer for several years. Susan has a MEd in Elementary/Secondary Education for East Texas State University. She has been a high school math teacher forever and just retired this past year. She has two sons and five grandchildren that have all attended camp.

Jayne Blackburn is the Secretary of the Association of Cedarbrook Camps. She also works closely with the ACC VP in all things related to the ACC annual conference. Jayne has been involved in Cascade Camp Cedarbrook where she attended as an Explorer camper for 1 year. She has served on staff in multiple roles and currently serves as the Executive Director, Registrar/Office Manager, and Healthcare manager. Jayne is a certified Pediatric ICU RN with a MSN degree focused on Nursing Education. She is married to her husband Larry and together they enjoy their 11 cats! 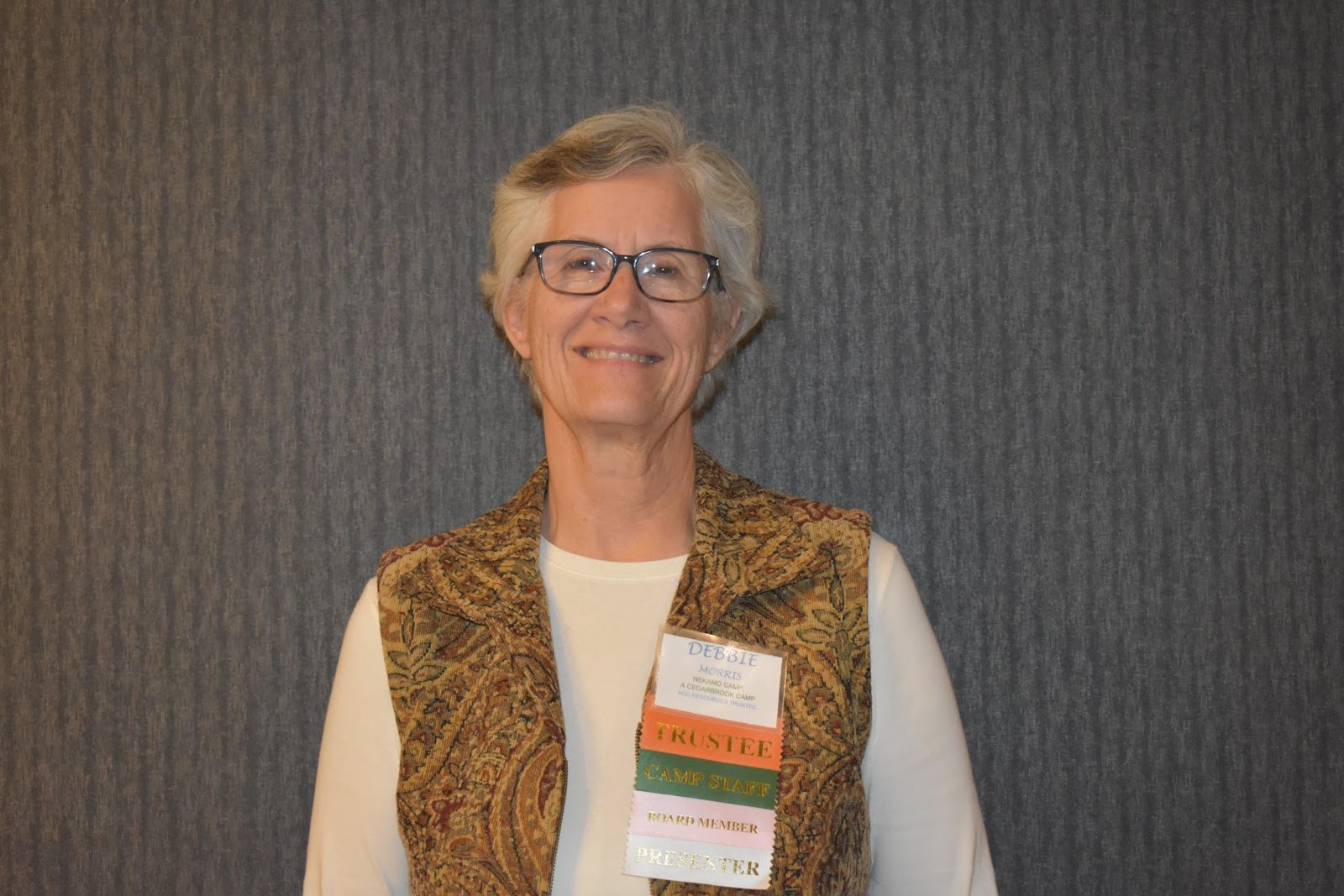 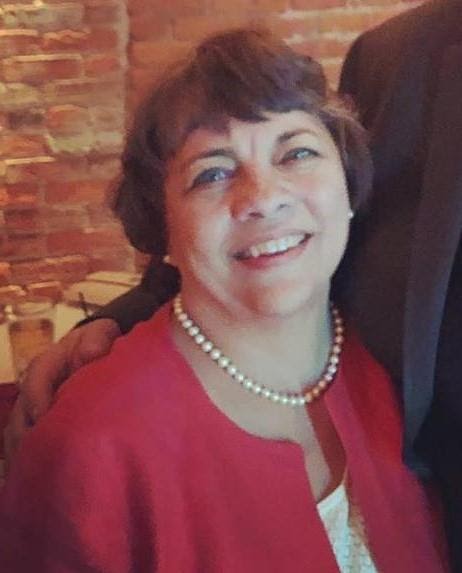 Debbie Morris is the Resources Trustee of the Association of Cedarbrook Camps. Debbie attended NeKaMo Camp as a camper for four years and has been on staff there most years since 1975. She has counseled in every age division, was director for 17 years, and now is the registrar and CILT instructor. Debbie received her B.A. in English from Wittenberg University in Springfield, OH. She started writing Bible Ex curriculum in 2003 and continues to do so, making it available on her website www.moreoftheking.com. She oversees the children’s ministry at her church, often leads women’s Bible studies, and she and her husband are looking forward to becoming grandparents in the summer, 2021.

Ginny Adametz is the Community Building Trustee of the Association of Cedarbrook Camps. Her first camping experience began as a Pioneer Girl third grader at Camp Cherith in the Adirondacks. Once her family moved to the New Jersey shore, she attended Camp Cherith in the Poconos. As is often the case, significant spiritual experiences in our childhood give us a desire to serve in our adult life. Cedarbrook Camp in Pennsylvania has offered her the opportunity to serve as counselor, CILT Instructor, Food Service support and board member. She and her husband of nearly 40 years live in southeastern PA. Her part-time work outside her home is an optometric assistant in a local doctor’s office . Currently she and her husband serve as Ministry Council leaders at their local church. Ginny and her husband have two married daughters and a son in his junior year at Liberty University in Lynchburg, VA. 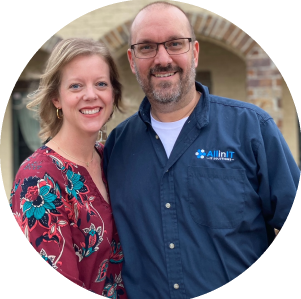 Jim Sellevaag is the Risk and Best Practices Trustee. Jim has been involved in Cedarbrook Camps for 7 years, and currently serves as CILT instructor at Cedarbrook Camp in Pennsylvania. Jim received his Bachelor of Science degree in Criminal Justice in 2002 from Northeastern University in Boston, MA. Jim has worked in the corporate and non-profit security industry for almost 20 years, and is currently a security consultant with AECOM, a large multinational firm. Jim is married to Kelly (aka Tanager, CCPA Executive Director) with 2 children, both camp attenders in Pennsylvania.

Genie Effland is the Education and Training Trustee. Genie has been involved in Cedarbrook Camps for over 30 years and has served in a variety of roles at Cedarbrook Camp Texas. Currently she is the CILT coordinator and Assistant Director for Texas. Genie has been working with children for most of her life beginning as the big sister to 40 siblings, teaching K-8th at a Chrisitian School, and working with children and youth at her local church. Genie and her husband David have three boys who grew up attending Cedarbrook and are now looking forward to having two grandsons join them. Outside of camp Genie works for a commercial landscaping company in Austin, TX. as the pre-construction administrator.

Debbie O’Dell serves as the Financial Secretary for the Association of Cedarbrook Camps. Debbie attended Camp Cherith with her mother and siblings in Southern California when she was in Jr. High and High School. She graduated from the CIT (now CILT) program and was the Assistant Cook for a summer before college and being a missionary in Japan took her away from camp. After 27 years, Debbie attended a CILT reunion and got reconnected with Cedarbrook Camp Southern California (CCSC). Sharon Livingston looked her in the eye and said, “You need to be on the board.” Debbie has been on the board of CCSC in various positions for the past 9 years and has been attending ACC’s National Conference the past 8 years. Debbie is married and has 3 adult children and 5 grandsons. Debbie is an Associate Professor of Nursing at Biola University and has a passion for Mental Health. 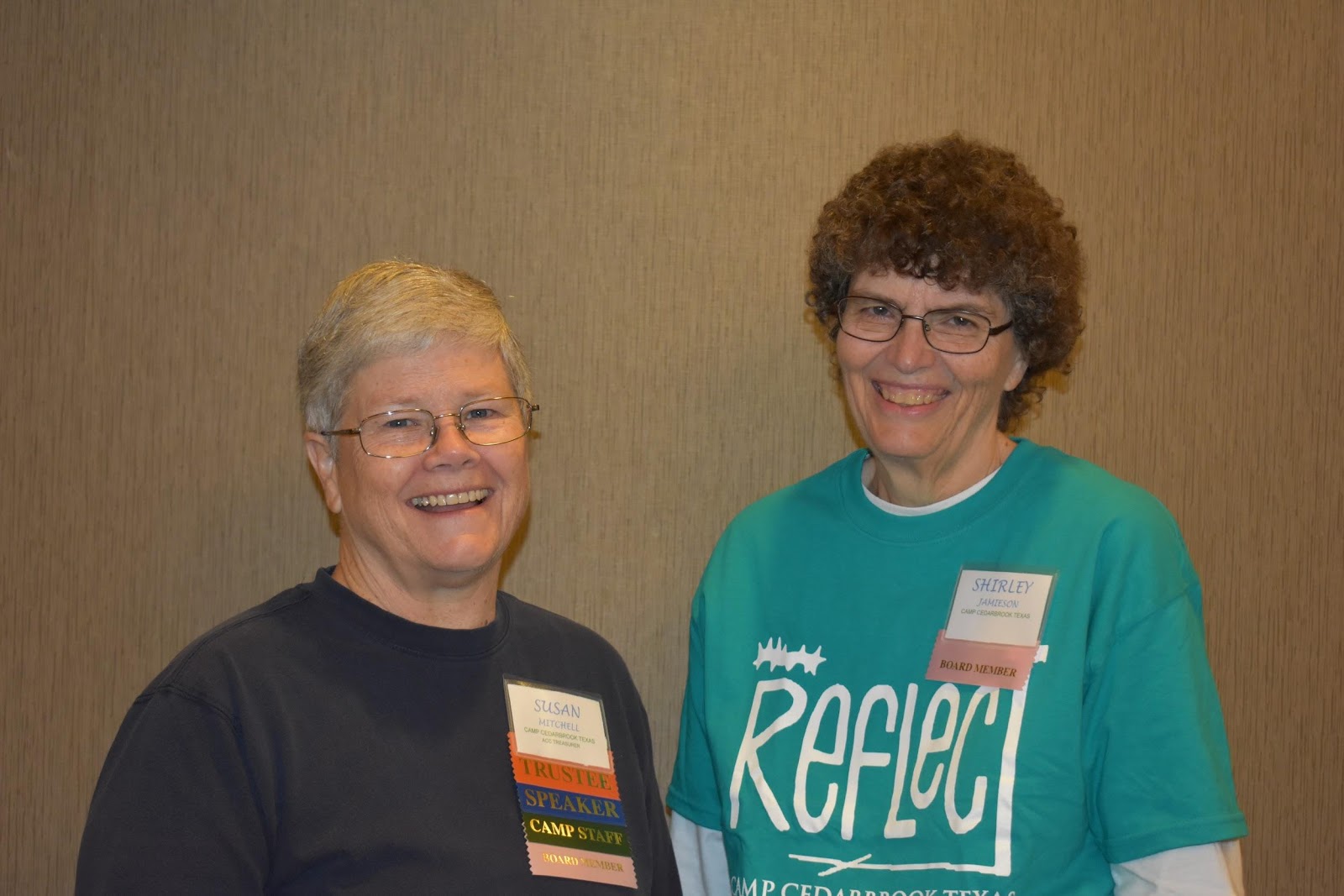 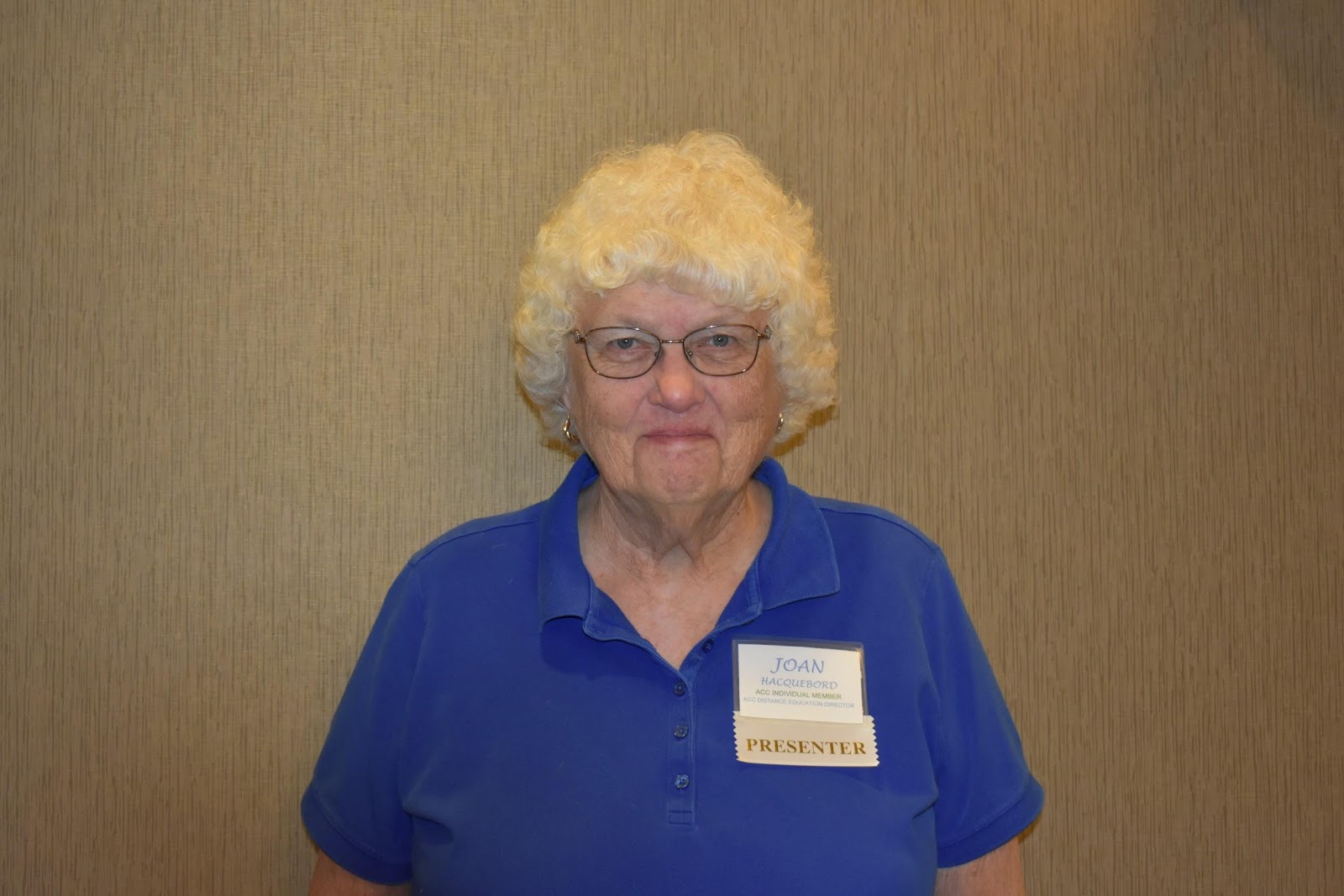 Shirley Jamieson is part of the ACC staff overseeing the Distance Ed program. Shirley has been involved in Cedarbrook camping since she was a camper at Colorado Camp Cherith. She graduated from the CIT program there and was on staff before moving to Texas. She has also been on staff at Saguaro Camp Cedarbrook and Land O Sunshine. Over the years she has served in just about every position at camp except nurse and lifeguard. Most recently Shirley served as the Director for Camp Cedarbrook Texas (now retired) and is now the board president. Before officially retiring from her “real” job Shirley worked for a children’s hospital in the Laboratory IS department. She is passionate about the Cedarbrook camping ministry and is excited to be a part of the staff working to enhance learning through the distance ed modules.

My name is Joan Hacquebord, but at camp I have been “Snowy” since 1960 when the camp director named me. That was at Saddle Lake Camp Cherith in Michigan and was for the Chicago area kids. Those years I was at various times, counselor, DD, nurse, archery instructor and even wrangler one week. That camp moved to Wisconsin in 1970 and was called Trail Ridge Camp Cherith. By then I was married and had a baby, so some years I was the cook and brought the kids or brought along a friend to watch the kids. In 1981 we moved to Tampa and there was a group already planning to start a Florida camp. I joined them and the first year for Land o’ Sunshine Camp Cherith was 1983. My very favorite role was being the division director for the middle-school girls. Beginning in 1999 the Association of Cedarbrook Camps began a distance education program with on-line modules. I have been overseeing that program ever since. Twenty-two modules have been written by several people and a dozen or so staff have been facilitators. Next fall I will be turning over the leadership to Shirley Jamieson from Texas. Her hair is not white like mine. Time for me to retire.